Guardians Of  The Galaxy 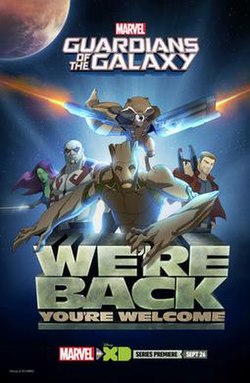 Guardians of the Galaxy is an American animated television series. It is based on the Marvel Comics superhero team of the same name. It is produced by Marvel Television and Marvel Animation. The series airs on Disney XD. It premiered on September 26, 2015 as a part of the Marvel Universe block.

While the series serves as a continuation of the first film's plot, the film's director James Gunn has stated that it is not a part of the Marvel Cinematic Universe nor connected to the feature film or its sequel

Disney XD premiered the second season of the series on March 11, 2017.