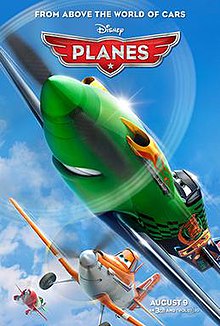 Planes is a 2013 American 3D computer-animated sports comedy film produced by DisneyToon Studios and released by Walt Disney Pictures. It is a spin-off of Pixar's Cars franchise and the first film in a planned Planes trilogy. Despite not being produced by Pixar, the film was co-written and executive produced by Pixar's chief creative officer John Lasseter, who directed the Cars films.

Like most of DisneyToon's films, it was initially set to be released as a direct-to-video film, but was theatrically released on August 9, 2013 in the Disney Digital 3D and RealD 3D formats. A sequel, titled Planes: Fire & Rescue, is scheduled for a theatrical release on July 18, 2014