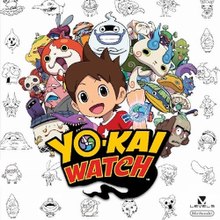 Yo-kai Watch (Japanese: 妖怪ウォッチ Hepburn: Yōkai Wotchi) is a role-playing video game developed by Level-5 for the Nintendo 3DS and the first game in the Yo-kai Watch franchise. Originally released in Japan on July 11, 2013, the game is based around the Yōkai of Japanese folklore, who are said to be ghosts and apparitions that cause mischief in daily life. In Yo-kai Watch, player character Nathan "Nate" Adams or Katie Forester, depending on who the player chooses, is given the titular watch, which gives him or her the ability to see Yo-kai, after stumbling across and befriending a butler Yo-kai named Whisper. Players assume the role of Nate or Katie, as he or she travels around town searching for and befriending peaceful Yo-kai, battling hostile Yo-kai, and solving problems caused by mischievous Yo-kai.

The game was initially released to a positive commercial and critical reception in Japan, and a steady rise in popularity spawned various media spin-offs, such as a toy line and an anime series, in addition to a sequel to the game, released the following year for the Nintendo 3DS. Despite the franchise's success in Japan, the game would not be released internationally until two years later, when Nintendo announced plans to localize the game in the West. After being showcased at the E3 2015 and the EB Games Expo 2015, the game was released in 2015. By November 2014, the game had sold over a million copies in Japan alone, making it one of the best selling games on the Nintendo 3DS.